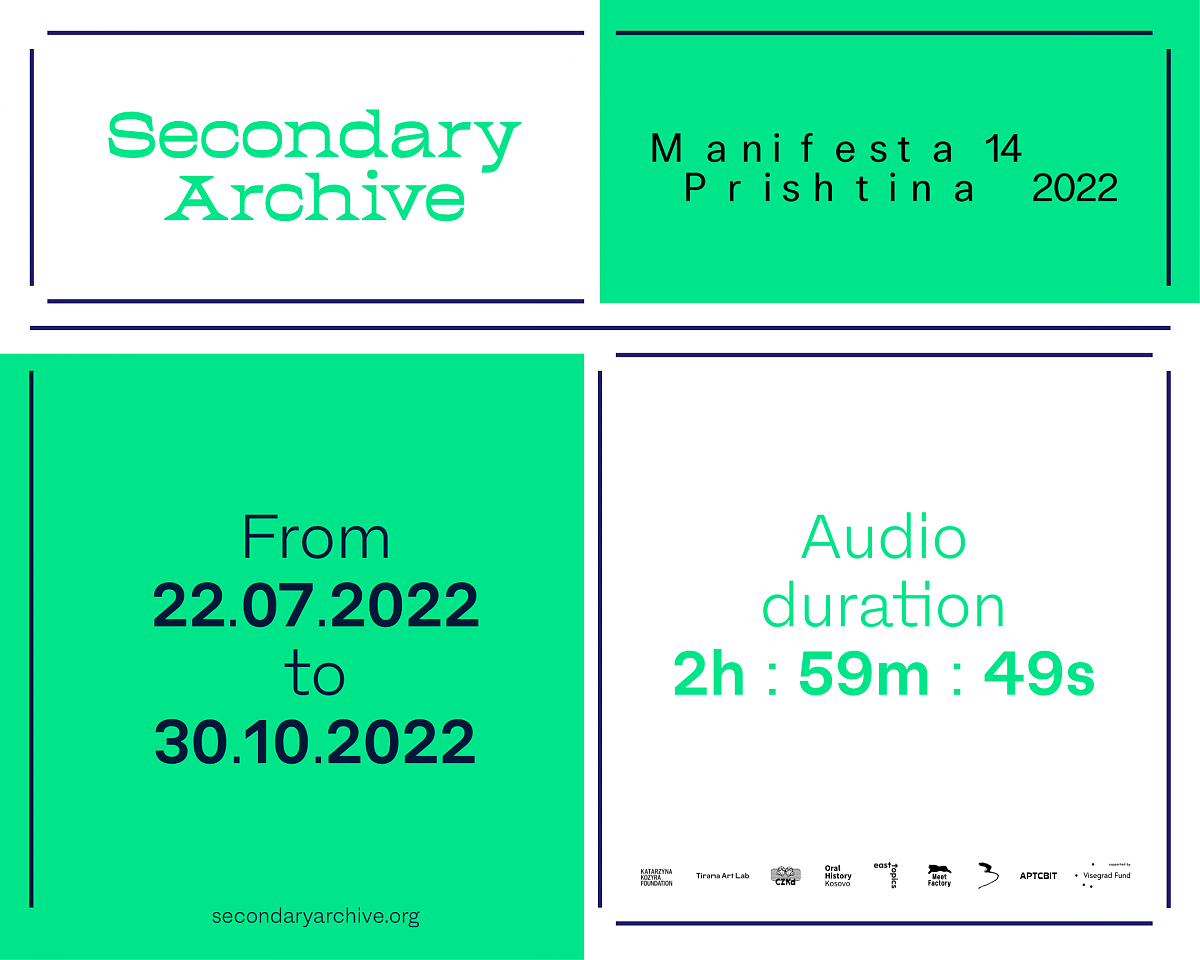 The secondaryarchive.org platform was created in response to the lack of visibility of women from Central and Eastern Europe in recent art history. The digital archive, which the Katarzyna Kozyra Foundation and its partners have been working on for two years, is designed to showcase the works of female artists from this region and create a space where they will be able to speak in an active voice. So far, the platform has managed to collect hundreds of artistic statements by female artists from Belarus, the Czech Republic, Hungary, Poland, Slovakia and Ukraine. All the artists in the archives were invited to participate in the exhibition at Manifesta 14. They will be joined by artists from Albania, Kosovo and Serbia, whose statements will later be included in the digital archive. The list of all the artists who will take part in the project will be revealed one month before the official biennial opening.

The installation presented at Manifesta 14 intends to show a virtual archive in a real space through the medium of sound. Secondary Archive will resonate in the interiors of the National Gallery of Kosovo as a sound-based piece composed of the voices of hundreds of artists. The project consists of short sound-pieces that relate to the three main themes raised by the artists in the archive: art, everyday life and poli-
tics. The content of the recordings takes various forms: from manifestos, through sound poetry, confessions and even arguments to simple words whispered or repeatedly shouted out. This powerful wave of sound manifests the lack of presence, makes visible the invisibility of women, regions, unrecognized borders, languages and narratives. At the same time, it is meant to be a hand held out towards the Other, women (artists), a note for our shared future to not ignore the diversities, but try to share narratives, stories, experiences and paths. The project aims to help explore the cultural areas of the countries represented by the artists – to bring closer the intangible practices, knowledge and experiences of women in art, which have left few or no tangible traces. The partners of the project decided to cancel out the role of a curator as well as selection of artists, wanting to avoid giving a preference to specific country or issue. To reflect the diversity and complexity of a region that is often perceived as culturally homogeneous, artists’voices are recorded in the language of their choice. Subtitles in English and Albanian will ensure a dialogue between female artists from very different generations and political contexts, but who face similar issues
of lack of recognition on western art scene.

Manifesta, which changes its location every two years, will be held this year in the capital of Kosovo, Prishtina. The nomadic biennial purposely strives to keep its distance from what is often seen as the dominant centers of artistic life, seeking instead fresh and fertile terrain to engage local, national and international audiences with new aspects and forms of artistic expression. Participants will present their work at 22 venues across the city, including the legendary building of the decaying Grand Hotel, the impressive National Library of Kosovo, the fascinating space of the abandoned Kino Rinia, the recovering Observatory of Prishtina building and the thriving National Gallery, where the Secondary Archive installation will be shown. The biennial, lasting 100 days, will be attended by 77 participants from around 32 countries, with nearly half of them coming from Kosovo. The program created together with the local community focuses on catalyzing positive changes and empowering citizens in their efforts to reclaim public space. Manifesta, the European Biennial of Contemporary Art was created in the early 1990s in response to the political, economic and social changes following the end of the Cold War and the subsequent steps towards European integration. The traveling platform focuses on the dialogue between art and society in Europe. Manifesta 14 Prishtina will run from July 22nd to October 30th, 2022. All the exhibitions and events within the biennial will be free and open to the public. More information: www.manifesta14.org